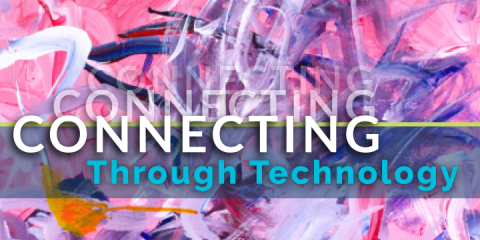 Not everyone communicates the same way. For some individuals, expressing thoughts, feelings, and emotions is made more challenging by certain disabilities. For non-verbal individuals, assistive technology supports offer additional ways to make connections, be heard, and join in. This is especially true for Dan.

Dan is a highly energetic and personable 67 year old man with cerebral palsy. He enjoys good company, good jokes, and a good beer. Throughout his lifetime, Dan has seen his fair share of technology advances—in his memoir, written with the assistance of his communication device, he recalls a time before he got his first wheelchair when he was pulled around in a red wagon. Now utilizing a power wheelchair to get around on his own, he has since added additional technology supports to further his independence.

Though he is able to communicate by vocalizing a ‘yes’ or ‘no’ (which he prefers in direct conversations) or by motioning when a choice is involved, he utilizes technology supports to express himself in greater detail. For the past several years, Dan has used the Essence Language System communication device, acquired using waiver funding. Resembling a large tablet, the device helps him to communicate via text-to-speech or through email using tab-based navigation and head mouse technology. The built in software, which includes spelling and word prediction for quicker and more efficient thought expression, also provides Internet access for Dan to perform Google searches or get to YouTube to listen to his favorite music—country.

“He expresses himself very well even though he’s not verbal, but through his communication device he gets the words out.”

Communicating isn’t done through words alone. Art can be a powerful outlet for individuals of all abilities to capture their emotions and express themselves. After the passing of his wife, Sally, in May 2017, art became a great outlet for him to express his grief.Through the Creative Arts program at his day program (Midwest Special Services, Inc), Dan showed interest and skill in painting. To help him paint independently, staff members worked with him to create assistive technology tools made from basic objects. An adaptive head apparatus was created using the inside framing of a construction hat and a metal rod to hold his paint brushes directly in front of his eye, which is his preferred placement while working. Using this device, along with an adapted easel and palette, Dan is able to spend his time creating large paintings that have been displayed in local galleries and exhibitions—like his recent live painting installation at a Minnesota Wild Game.

Because of his patience and motivation for increased independence, Dan and his support team were able to explore different technologies that worked for him and met his goals. He is not only able to connect further with individuals through his communication device, but engage the broader community as well through his art—showing others what is possible.

In addition to taking advantage of assistive technology to express himself, Dan also utilizes various assistive devices around his home, supported by Living Well Disability Services, to maintain his independence which is documented in this TRC case study.

Don’t miss the next article!

Visit the ARRM Technology Resource Center to learn about more success stories and case studies showing how technology is changing the lives of those living with disabilities or learn more about how to start the conversation.

Technology On The Job

Dylan Dreifke provides outstanding customer service at The Home Depot by utilizing his iPad, a free Home Depot app, and his amazing memory (prior to being hired, h

A 159 hour per week drop in caregiver hours seems dramatic. That’s because it is—but in a good way. Ryan Sebelius was able to achieve greater independence while decreasing his need for in-person support through the use of remote support technology. Though not “traditionally” supported 24 hours a day as he was before the addition of technology, he is certainly not without support during the times a caregiver isn’t physically present in his home.

“Alexa, Turn on My Lights.”

The ability to control one’s environment by voice is a perk for some people, but a life changing opportunity for many with disabilities. Just ask Val, whose use of Echo devices and assistive technology sparked further discussions and adoption at The Phoenix Residence, Inc. She’ll gladly tell you about her current technology and how it helps her feel more “like an adult”.

The ARRM Technology Resource Center serves as Minnesota’s primary source for information on how to assess, plan, fund, and implement various forms of technology supports. Because implementing technology supports is a three-way conversation and educating each party is critical to its success, the center is designed for providers, service recipients, and case managers.