“Alexa, Turn on My Lights.” 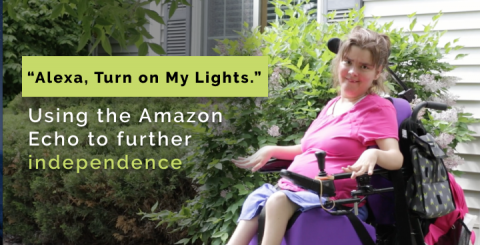 What if you could turn your lights on or off by using your voice? Control lights? Adjust the room’s temperature? These things and much more are all achievable by utilizing personal home assistants like the Amazon Echo. Though small in size (and modest in price), this little device offers many possibilities for people of all abilities to complete life tasks and help increase or maintain independence. The Echo, when paired with other smart home devices, has seemingly limitless opportunities and applications to make life tasks easier—especially for people with disabilities who would otherwise require staff assistance. Over the next several months, we’ll be covering individual experiences with these devices to help spread the word on what they can do and show how people are using (and adapting) them to reach their goals.

Recently, we shared a story about The Phoenix Residence’s foray into personal home assistive devices. The main catalyst for their adoption of Echo devices and planned use of additional smart home technology was Val. When moving in, she not only brought the usual furniture and accessories, but tech, too! Val, along with her parents, have created an environment that helps her complete certain tasks independently and stay connected to family.

“I wouldn’t even use the word independence. I would say more freedom. More being able to feel like an adult because I’m able to do so much stuff on my own thanks to a device like Alexa.” - Val

Val utilizes the Amazon Echo Show along with smart bulbs and plugs to control her room. “Alexa, turn on my bedroom lights,” she says as she approaches her doorway in her power wheelchair. The lights, after a brief second, turn on. Moving toward her desk, she sits in front of her Echo Show while she talks about the different ways she can control her environment herself.

Demonstrating her tech further, she asks Alexa to turn her desk lamp on and off. Next, a simple command to control her fan, and then her TV. The TV takes a few seconds to respond, but being able to turn it on and off without staff assistance is still a desirable feature. While Val walks us through the technology she uses, she shares how being able to use her voice instead of  needing to call staff or struggling to do certain tasks herself (which she points out is nearly impossible some days) is “super cool”.

Val also uses her Echo Show to call her parents hands-free. Because of the screen feature on the Show, Val and her parents are able to see each other during the call. Val loves being able to show them her latest project from her day program and having it feel like her mom is right by her side when she’s not feeling well or is just having a bad day.  Though Val has several pieces of assistive tech in her room currently, she has plans to increase her technology in the future, like adding the function to change the channel on the TV. For now, she is enjoying the independence (or freedom, as she would say), and loves sharing her Amazon Echo experience with others.

To help promote and spread the use of technology as part of the Technology Resource Center’s mission, the TRC is giving away a handful of Amazon Echo devices over the next few months. Devices will be given out to people with disabilities looking to share their experiences to help better educate other TRC community members on device usability, pros/cons, and any wins/ struggles they faced with setup and utilization. The first person to receive an Echo giveaway device—an Echo Dot—was Bill. Bill, who is Val’s newest roommate, is an extremely happy and personable individual. After seeing what Val and others around the home could do with their Echo devices, he was excited to get his own. We met with Bill prior to meeting Val to drop off his new Echo Dot and set up his device. It was a lot of fun meeting him, joking around with him, and talking through how he planned on using the device. We shot video of Bill and Alan Berner, the vice president of community services at Phoenix, setting up his new device and will be catching up with him about his experience so far in an upcoming post. Stay tuned!

Don't miss the next article!

Visit the ARRM Technology Resource Center to learn about more success stories and case studies showing how technology is changing the lives of those living with disabilities or learn more about how to start the conversation.

Technology On The Job

Dylan Dreifke provides outstanding customer service at The Home Depot by utilizing his iPad, a free Home Depot app, and his amazing memory (prior to being hired, h

A 159 hour per week drop in caregiver hours seems dramatic. That’s because it is—but in a good way. Ryan Sebelius was able to achieve greater independence while decreasing his need for in-person support through the use of remote support technology. Though not “traditionally” supported 24 hours a day as he was before the addition of technology, he is certainly not without support during the times a caregiver isn’t physically present in his home.

Not everyone communicates the same way. For some individuals, expressing thoughts, feelings, and emotions is made more challenging by certain disabilities.

The ARRM Technology Resource Center serves as Minnesota’s primary source for information on how to assess, plan, fund, and implement various forms of technology supports. Because implementing technology supports is a three-way conversation and educating each party is critical to its success, the center is designed for providers, service recipients, and case managers.